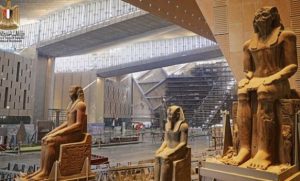 10 years after the Grand Egyptian Museum was due to open, the due date is finally here! The brand new Cairo Museum is opening for the very first time in June 2021.

Construction of GEM has taken eight years so far, with the opening delayed several times. It was pushed back from late 2020 to 2021 in light of the outbreak of COVID-19.

Egypt Transported 22 Mummies in Elaborate Parade to Celebrate New Museum in Cairo. Mummies, including Ramses II and Queen Hatshepsut, will now live at Egypt’s new National Museum of Egyptian Civilization. The mummies made their way through Cairo in an elaborate over the Easter weekend to celebrate their new resting place at the National Museum of Egyptian Civilization.

The “Pharoahs’ Golden Parade” — complete with performers, light displays, and a marching band — traveled from the Egyptian Museum in Tahrir Square to the new museum site, about three miles southeast.

The mummified remains of the 22 pharaohs, 18 kings and four queens, were transported in trucks decorated to look like the ancient boats that once carried the bodies of pharaohs to their tombs. The mummies had been packed inside a tube of nitrogen to protect them during transport.

“By doing it like this, with great pomp and circumstance, the mummies are getting their due,” Salima Ikram, an Egyptologist at the American University in Cairo, told Reuters. “These are the kings of Egypt, these are the pharaohs. And so, it is a way of showing respect.”

The journey across the city took approximately an hour. Roads along the Nile were shut down for the ceremony. When the mummies finally arrived at their new museum, they were greeted with a 21-gun salute.

Most of the mummies were from Egypt’s New Kingdom, which ruled from 1539 BC to 1075 BC, and included the famous rulers Ramses II and Queen Hatshepsut. The mummies were buried about 3,000 years ago in and around Egypt’s Valley of the Kings and were discovered during an excavation in the 19th century.

After excavation, the mummies were transported to Cairo by boats. According to Al Jazeera, Some were displayed for the public to see while others were privately stored. Now, 20 of the mummies will be on display at the brand new museum. 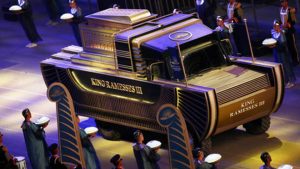 The museum, which is spread across 490,000 square metres, has been designed by Dublin-based architects Heneghan Peng. “You could park a 747 inside,” said architect Roisin Heneghan.

It will boast panoramic views of the pyramids of Giza, and the largest artefact will be an enormous statue of Ramses the Great, located in the atrium. The grand staircase behind will house 87 statues of pharaohs and Egyptian gods.

In addition, the world’s largest archaeological museum will have 28 shops, ten restaurants, a conference centre and a cinema.

There will be around 100,000 objects in the collection, and the star attraction will be all 5,600 objects from the tomb of King Tutankhamun.

GEM will also feature Tutankhamun galleries and a replica of his tomb, although the galleries will be more than 60 times the size of the original tomb. Tutankhamun’s outer coffin will be on display, alongside his two inner coffins.

Moftah estimates that 2 to 3 million guests will visit GEM in its first year of opening, and in the longer-term up to 8 million a year.

The Grand Egyptian Museum has taken almost 20 years to create, from architectural competition to planned opening in 2021.

National Museum of Egyptian Civilisation opens fully to the public. Visitors browse exhibits at Egypt’s new National Museum of Egyptian Civilisation (NMEC) in the Fustat district of Old Cairo, after the museum opened fully to the public, the day after a procession of floats carried the mummified remains of 22 pharaohs passed through the capital to their new resting place at the museum. 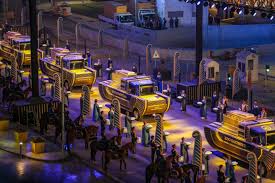 Book a trip to see the new Cairo Museums and exhibits for 2021, 2022 and beyond with Egypt Escapes Ultimate Egypt Experience tour.

Receive special offers, competitions & added perks when you sign up!

All the flights and flight-inclusive holidays on this website are financially protected by the ATOL scheme. When you pay you will be supplied with an ATOL Certificate. Please ask for it and check to ensure that everything you booked (flights, hotels and other services) is listed on it. Please see our booking conditions for further information or for more information about financial protection and the ATOL Certificate go to: www.atol.org.uk